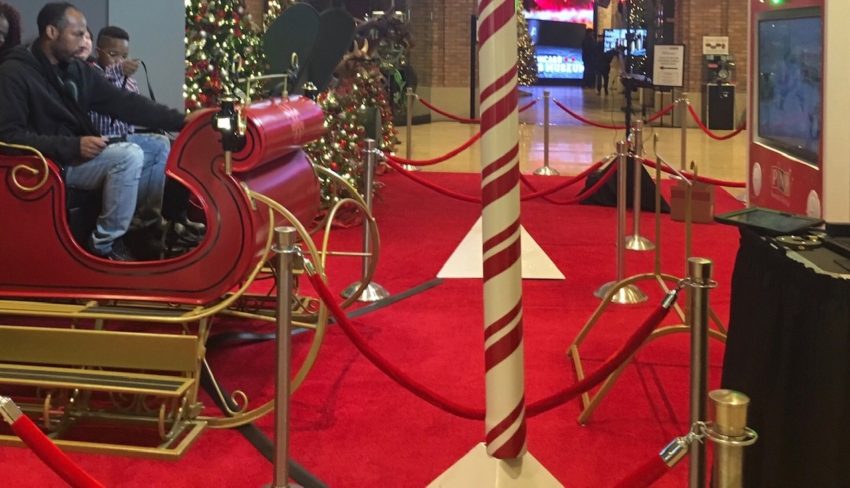 We are all waiting for the arrival of the World Famous Santa Claus! Kids have sent their lists, moms have done their shopping, and dads are hoping they don’t get another pair of slippers for Christmas again. The Magic all lies on Santa! I have good news for you. You can take the kids to see the big man himself and get some really cute pictures as well as a experience like never before….riding his sleigh!

A few weeks ago the family and I traveled down to the impressive Water Tower Place to visit Old Saint Nick! Dereon was being a big boy and taking one for the team since he’s met Santa hundred of times by now. However Chance was completely focused on every element. He was trying to figure out everything. Where Santa was seated? Was that the sleigh? Were those Santa’s helpers? When we arrived to the 7th floor the signage lead us right to Santa and his elaborate set up. We waited in line and then boom! We were next. Chance was a little nervous and his eyes looked at everything around Santa and he didn’t want to sit on his lap. They talked for a while though and Chance was able to tell him about the items on his list. Santa respected Chance’s need for space and didn’t pressure him which made Chance eventually relax and take pictures.

After the photo shoot we headed to the sleigh. It was very big, bright and shiny! Dennis was the first one on like a big kid. Dereon decided to help “drive” the sleigh while Chance and I buckled up in the back. When I tell you it’s an experience that your family will laugh at for years believe me. I’ll share the video with you here, but to really get the feel you need to try it yourself. Nothing like wholesome family fun! Santa and his sleigh is available for you and yours until Christmas Eve. So stop what you are doing and head down to The Water Tower Place and hang with Santa before he heads back to the North Pole! If you aren’t in Chicago I have other locations for you here.

The picture packages are between $39-$49 with cute keepsakes and trinkets! After our little time with Santa we did some Christmas shopping, ate some donuts and had some lattes. The kids even went downstairs to the Lego store and played around in amazement while showing me which items they wanted on their list. The whole Water Tower Place had Christmas spirit all around it. It’s definitely a one stop shop! It was a good time had by all. So stop what you are doing and head down to Water Tower Place today!

P.S. If you have some last minute shopping to do this would be a win/win situation!