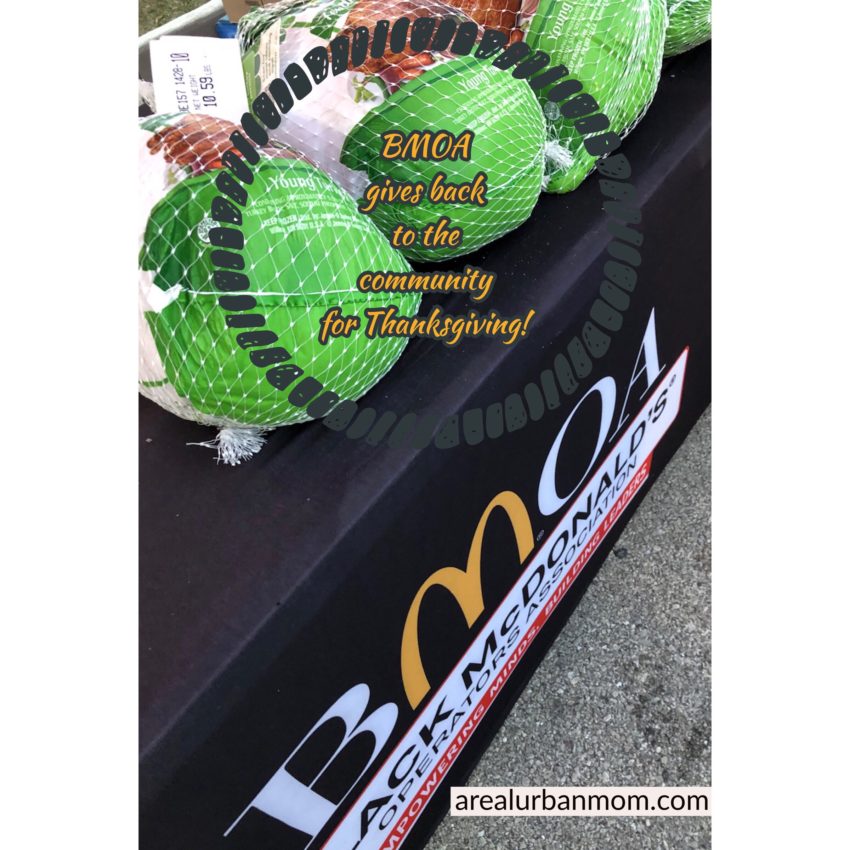 Last week I had the amazing honor of helping give out hundred’s of Turkeys on the West Side of Chicago with the Black McDonald’s Operators Association (BMOA)! I arrived around 6:30am (which is VERY early for this girl) at the McDonald’s located 5105 W. Madison and saw a long line of people warmly dressed patiently waiting. There were tents put up and gospel music playing because Gospel Radio 1390 was live broadcasting from the giveaway. Several McDonald’s employees were busy helping set up and even the Chicago police began to arrive.

Gospel Radio 1390 host Sonya Blakey introduced a Evangelist to pray and then told the crowd it was her birthday which brought loud claps from the line and well wishes being screamed out. The Gospel music was fun and upbeat and the line was definitely orderly. At 7am promptly the giveaway began. I was one of the group of 5 to pass out turkeys. The line consisted of men and women young and old. As we passed out huge Butterball Turkeys the “thank you’s” echoed the parking lot. I was overwhelmed with joy to be a part of something so special in my community! As a West Sider I smile with glee when I see the community getting blessed!

The party wasn’t just on the West Side, there were other locations where the turkey drive was held out South. Plus it wasn’t just one day it was a whole weekend affair. If you missed one spot there were options. The local politicians in the area represented showed up to show their support. The Chicago Police Department definitely made their presence known. As well as some of the actual owners of the various McDonald’s locations.

It was cold outside, but I’ll be honest I didn’t realize the frigid temperatures until I was in the Lyft headed home and the driver’s heat kicked in. I melted like a little freeze pop in the back seat, but the wholeness I felt on the inside surpassed everything else. Our community needs us and we have to step up to answer the call. Thank you BMOA for allowing me to be apart of your greatness!